Mr. Richard was born in the USA and has grown up in Asia. He graduated from Bangkok University with a Bachelor’s degree in Business and he is currently pursuing his Master's degree in Education from Buffalo State College (SUNY). Mr. Richard has a range of experience both in sales and marketing, and recently in the education sector as a teacher and administrator.

All posts from Mr. Rich

Congratulations to our Primary Years students on being risk-takers and completing their first assembly of the year. Their performance was informative and creative. The students discussed their Unit of Inquiry and related it to their exploration of Multiple Intelligence and Edward de Bono’s Six Thinking Hats.

The Primary Years students’ unit of inquiry uncovered how our differences, interests and abilities allows us to develop an identity. This led the students to investigate what makes them “smart” and how that compares to others. Their interest in this topic led to the students’ desire to share their learning during the school assembly. 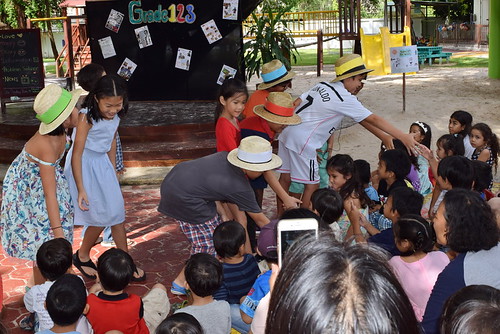 The Primary Years Assembly with introducing themselves and then shaking hands with MY International School community while singing their international “Hello Song” of many languages. Next the audience had to watch closely to identify which “Thinking Hat” each Primary Year student represented during the First Day of Soccer School skit.

Six Thinking Hats was originally published by Edward de Bono as a self-help book that described a tool for group and individual thinking. Thinking was done by “putting on” different colored hats. Each color hat associated with a different ideal on how to think in order to provide a more detailed and broader thought.

Put On Your Thinking Hats

The White Hat calls for information known or needed. “The facts, just the facts.”

The Yellow Hat symbolizes brightness and optimism. Under this hat you explore the positives and probe for value and benefit.

The Black Hat is judgment – the devil’s advocate or why something may not work. Spot the difficulties and dangers; where things might go wrong. Probably the most powerful and useful of the Hats but a problem if overused.

The Red Hat signifies feelings, hunches and intuition. When using this hat you can express emotions and feelings and share fears, likes, dislikes, loves, and hates.

The Green Hat focuses on creativity; the possibilities, alternatives, and new ideas. It’s an opportunity to express new concepts and new perceptions.

The Blue Hat is used to manage the thinking process. It’s the control mechanism that ensures the Six Thinking Hats guidelines are observed.

Gardner explained eight criteria for a behavior to be considered an intelligence.

These eight criteria are:

Positive Parenting: Dengue Fever Prevention You are invited to our Positive Parenting workshop on Tuesday, January 26, 2016 from 8:30am to ...
KPIS Spelling Bee Third graders at Magic Years International School were invited to participate in KPIS Inter-Sch...
Parents Guide About IB PYP If you attend a workshop, meeting, or even tour the school you will hear the acronyms “IB” and ...
Educational Apps One certainty about a child's schooling is that it does not end after school. The need to forge...